For thousands of years, ever since man began to understand the nutritional and medicinal benefits of certain fruits and herbs, the traditional medicine has helped cure many diseases with natural remedies. One of such natural nutritious, as well as a medicinal remedy, is Elderberry. Throughout the regions of Europe, North America, North Africa and West Asia, Elderberries have been considered a Holy tree, owing to its enriching ability to improve health and longevity. Astonishingly positive impact on health along Elderberry nutrition values, these dark blue or purplish berries are rich in color as well as nutrients.

A high amount of polyphenol anthocyanin is present in the Elderberries, which gives them the iconic dark bluish color. Anthocyanin is a clinically proven antioxidant which allows the berries to strive through long periods of ultra-violet radiation from the Sun rays. These antioxidant properties can be passed onto their consumers which has immense benefits and advantages including anti-carcinogenic properties.

The nutritional and medicinal value of Elderberries have been known for thousands of years and was a well known medicinal and culinary item. Hippocrates, the famous writer and philosopher in 400 B.C. referred to Elderberries as his “medicinal chest”. The Egyptians were known to use the paste of Elderberries as treatment against skin darkening and improving the texture.

Such wide use of Elderberries since the ancient time is accredited to its rich source of immunologic nutrients, which makes the immune system strong against diseases. As we have progressed into the modern era, our lifestyles have become sedimentary, and all we consume today are processed foods. In order to release these toxins and harmful buildups in the body, a medicinal shrub such as Elderberry is the perfect neutralizer that the immune system requires.

Benefits of Elderberries – as explained on naturalalternativeremedy.com 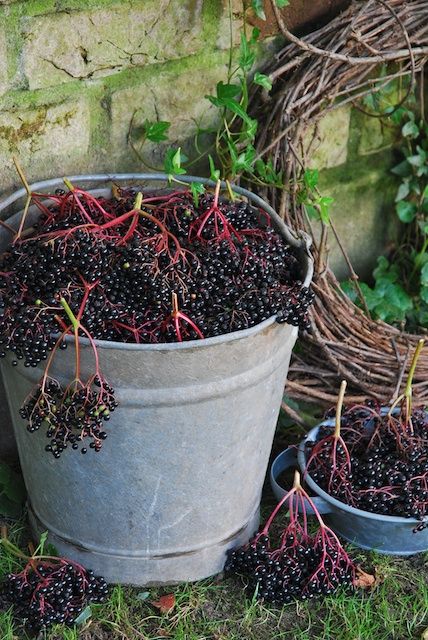 The Elderberry shrub usually grows to about 10 feet tall and blooms flowers that are yellow and white in the early summers. Around September, dark blue or purple Elderberries ripen and are ready for picking. These berries are the epicenter of medical qualities and have been commercially in use for various nutritional and medicinal requirements since the time of the Roman Empire.

Elderberries are a rich source of flavonoids, which are organic compounds with enriching antioxidant qualities. These antioxidants are effective in safeguarding cells against pathogens and diseases, which boosts the body’s immunological strength. Elderberries an abundant source of vitamin A, vitamin B, and a considerable amount of vitamin C as well as essential amino acids. All of these vitamins, amino acids and antioxidants help in the formation of a stronger and quick acting immune system.

Elderberries have been used in the form of tonic to treat influenza, known as the common cold and flu. By lowering the bronchial congestion and making you sweat more, the Elderberries have been magically effective. Standardized Elderberry extract called Sambucol can shorten the incubation period of influenza by three times, according to studies. The tonic Sambucol is comprised of other herbs and vitamin C besides Elderberry; hence it is inconclusive whether Elderberries have the same medicinal impact.

Research based on Elderberry and its effects as a weight loss catalyst were conducted in the University of Freiburg in Germany. The research included 80 individuals who daily consumed Elderberry juice composed of Elderberry blossom and berry powder extracts, in addition to extracts of asparagus. The liquid formula was found to be a substantial weight regulator not only in terms of fat percentage reduction, but also a beneficiary in lowering blood pressure, their physical, as well as mental condition.

A proprietary product called Sinupret, which is comprised of flowers of Elderberry plant, was analysed for its utilization to fight Sinus infections. The medicine is used to not only treat bacterial sinusitis, but is also used as a decongestant as well as an antibiotic. The patients who were treated with the blend of Sinupret showed significant speed of recovery over the others. It needs further research to conclude that Elderberries nutritional values can sure Sinus infections by themselves since Sinupret is comprised of other herbs as well.

Elderberries get its ripe color from substances that are associated with a hazardous chemical called cyanide hence black elderberries should not be consumed. The leaves, seeds and bark of the Elderberry tree may have a toxic effect on the body when they are not cooked properly or have not been ripened. The consumption of such unripe products could lead to gastrointestinal disorders, nausea, stomach cramps and vomiting, according to the NIH.

It has been found by extensive study that Elderberries nutritional values comprise of substances that can act as diuretics that are used for removal over extra fluid in the body. However, if you are under a diuretic medication already, it is advised that people who take diuretic medicines avoid Elderberries and consult their doctors. As Elderberry also has a laxative effect, people who take laxative medicines should avoid Elderberries.

Elderberry is among the most widely used and consumed shrub that dates back its medicinal relevance to the ancient tribes. Health related problems related to skin; influenza, obesity, and bronchial conditions such as immunodeficiency has received medicinal support from this natural medicinal shrub. Today, Elderberries are widely available in the form of berries, tonics, herbal extracts, powders and well as tablets and extracts. So use this natural remedy to boost your immunity and overall health with a necessary amount of caution.

Elderbrries are featured on Tiffany Corkern’s website, where she and her husband Jim share information about natural heath.  For more information please visit http://www.naturalalternativeremedy.com/4-well-known-health-benefits-of-elderberry/

Going Wild: Creating a Nature-Friendly Garden for the Whole Family